St. Andrews Castle is not exactly a castle — it is a sumptuous Bishop’s residence. The bishops originally lived in the precint of the cathedral, but eventually moved out to this ditched courtyard castle on the low shore to the north. Incorporated into the Fore Tower are some remains of a gatehouse built in 1200. In 1304, the castle was prepared for a visit by Edward. Shortly thereafer, it was dismantled by the scots as part of Robert the Bruce’s policy of slighting castles, but was repaired by Bishop William Lamberton in 1315-20. In 1337, the castle was captured and destroyed after a 3 week siege by the Earl of Moray 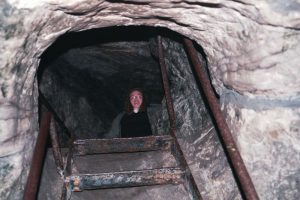 It lay in ruins until restored by Bishop Walter Trail, who died here in 1401. In this castle, the young James I was instructed by Bishop Wardlaw. In 1513, the front wall was strengthened by two round towers.

One of the most notorious act here in St. Andrews was the murder of Cardinal David Beaton, Archbishop 1539-46, by a party of protestants who entered the building disguised as workmen. Among the protestant defenders taken in the seige and sent to France as a galley slave was John Knox, a protestant preacher.

The next archbishop, John Hamilton, took on the rebuilding of the castle. In 1587, the Act of Annexation gave the lands and castle to the crown. It fell into ruins after this and in 1654 was dismantled to provide materials for the harbour walls.

Only two vaulted cellars remain of the kitchen. The sea tower contained two cellars, including a pit prison. The outer part of the west blockhouse has been destroyed, and much of the seaward buildings have collapsed into the sea.

The uppermost level contained a gallery, a rarity in SCotland, but common enough in England.

The ghost of the murdered bishop, dangled naked from the tower house, is supposed to haunt the castle.