Rain again for a few minutes this morning, but only a drizzle. So far, we’ve been unbelievably blessed with good weather. Every time we get somewhere, the sun comes out. We’re steaming a bit, but we couldn’t ask for better weather.

Burleigh Castle is literally standing on a street corner, with the strangest tower — round on the bottom, square on the top. It was locked, but a small note on the door said to ask Mrs… for the key. No address, though, so we were at a bit of a loss as to where to ask, since a small townhouse complex was across the street.

Just down the road, in the center of the Loch Leven is (guess!) Loch Leven Castle. We caught the little ferry (ok, it was a small motorboat) out to the castle island. It was very choppy and windy, and we had to go round the little island and approach from the lee side to be able to tie up at the dock.

The castle is interesting. The island used to be much smaller — the castle covered the entire island, with the walls seeming to rise up directly from the sea. They lowered the loch in 1868 and the island quadrupled in size. (How do you lower a loch?) The castle is best known for being the prison of Mary, Queen of Scots for about a year or so. We only stayed for 20 minutes, since the weather went back to ‘totally crappy’ and they wanted to stop running the ferry. The ride back was definitely wet. I feel sorry for the poor ferryman, who got soaked. We got the last ferry over to see the castle, got some sun while we were there. I can’t complain.

Mark remarked that it was a good place to have a castle. It was easy to defend, and was well designed to be supplied without having to open gates or anything. There was a hole in the bottom of the kitchen tower that allowed fresh water casks to be poured in to fill cisterns in the cellar, from outside the walls. I didn’t see a way to get food inside, but I would think that when the Loch was higher, there was probably a sea-gate that allowed offloading from a boat.

The sun came out again briefly when we hiked up Dollar Glen to see Castle Campbell, also called Castle Gloom. What a perfect setting. This is almost a fairy-tale castle, perched in this green and wooded glen. Mark says it reminds him of Neuenschwanstein, perched on a pinnacle of rock between two valleys. The castle is neat, but the storybook setting really makes it shine. We walked the Glen, being careful to avoid startling the sheep, as instructed. Castle Campbell is gorgeous, the views off the parapet walls go on forever. The gardens aren’t done, though the steep sided glen is inspiring. At the end of a slippery, muddy path with a tiny rail was a small waterfall, which over time has carved out this craggy valley. 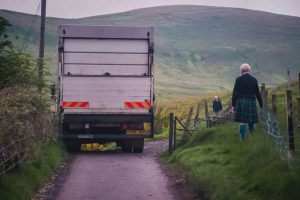 We had lunch in the tiny cafe in what was once the castle kitchens, served by a lovely older couple, kilt and kilted skirt and all. The gentleman was kind enough to talk to us about the way castles were built, and why doors are short (defense) and staircases wind counterclockwise (defense — a right-handed swordsman had an advantage coming down)…All defense. Seeing the pattern here?
On the way out, a giant lorry was parked at the top of the carpark. The driver, who admitted to not being the normal driver, wanted to know if the road got narrower. It was already a foot narrower than the truck. We left while the guy from the castle was helping him back down.

On the way to our hotel for the night, the Collearn Hotel, we passed a sign for a restricted bridge — 6’6″ tall! — and spent half an hour trying to actually find the bridge it referred to. There was a “test” area with restricted parking heights, I assume to make sure that you don’t crash into the bridge. How strange! We drove all over and never did find the bridge, although we did travel over a long stretch of “Roman Road” — well, not the real thing anymore, but a new road built on the site of an original roman road. It was straight, and flat. I think that the only flat, straight roads in Scotland were built by the Romans or the military.

We tried to go to the tour of Glenturret Distillery, not realizing that they stopped running about 4:00. Still, we did get a chance to wander around the oldest distillery in Scotland, and peer into some of the rooms. Even though we didn’t get the tour, they did let us see the audio-visual displays, and get a quick taste of 12 year old single malt. I can’t say I am a real fan of Scotch, but it was an interesting stop.