Castle Campbell has to be one of the most picturesque castles we visited. It is an impressive ruin built where the burns (streams) of Care and Sorrow join, and is overlooked by Gloom Hill. The castle was originally known as Castle Gloom.

The castle was originally a property of the Stewarts, but passed by marrriage to Colin Campbell, 1st Earl of Argyll, and Chancellor of Scotland. He had the name of the castle changed by an act of Parliament to Castle Campbell in 1489. The Marquis of Montrose tried to take the castle in 1645, but failed. Despite his failure, the 8th Earl of Argyll had Montrose hung, drawn, and quartered in 1651 for the attempt.

Cromwell’s forces occupied the castle in 1653, and only part of the castle was restored after it was burnt by Monck in 1654. Shortly thereafter, the 9th Earlof Argyll was condemned for treason. He escaped to start a rebellion, but was captured and executed in 1685. Campbell Castle was sold in the early 19th century to the Taits, who then sold it in 1859 to the Orr Family. In 1948, the castle went to the National Trust, although it is administered by Historic Scotland.

Castle Campbell was quite obviously built in three stages. The rectangular tower was the earliest stone building (from the 15th century), and was built on the site of a much earlier motte castle. The tower has four stories, of which three were vaulted. The original tower had two entrances, one of the ground floor and the second on the first story. The north wall has no openings at all in the first two stories, not even windows. In the 16th century, a second, square tower was added next to the original tower, with a spiral staircase allowing access to all floors.

The hall on the first floor of the rectangular tower is vaulted and has a prison in the thickness of one wall, reached through a hatch in the stone floor of the room above. The current roof was added during one of the restorations and is not original, but it has helped keep the tower in good condition.

The walk from the lower car park up the glen is often closed due to rock falls. The view from the gardens over the village of Dollar is spectacular. Historic Scotland runs a cozy tearoom in the old castle kitchens, and it was here that we learned quite a bit about castle architecture. The nice gentleman in the tea room explained that most staircases were clockwise because it made it easier for a right-handed swordsman to defend the staircase while he was coming down. The attacker, trying to climb the stairs, was hampered by the narrow end of the stairs. Door were short and narrow, not because people were smaller in those days but because a smaller opening was easier to defend. We had a very interesting conversation with him.

I’m not sure why it is called “Gloom” hill. I wonder if it’s a mispronunciation of “Gloam” or somesuch? I can only imagine how the castle would look in that pale, hazy light of sunrise.

I always expect rought, dark stone rooms inside a castle, and I’m continually surprised by the spacious and often bright chambers within these stone towers. This room is actually rather dim (flash is good!) but it is large and comfortable. With tapestries on the walls and rugs or rushes on the floor, this would be a nice room. Well, maybe it would without the gargoyle faces in the ceiling!

I wish we’d seen the glen and the castle in the sunshine. It was bright enough outside, but overcast nearly all day. Actually, I think that this castle would be glorious in the autumn, when all the trees change. Everything in the borders and lowlands is so uniformly green it almost becomes monotonous!

I loved these pictures below! The truckdriver (obviously not the normal delivery man) tried to run that ungainly truck down a tiny, winding, single-lane walking path. He got about halfway down before it became too narrow to pass and we encountered the driver, looking just a bit frazzled, as he was walking down to see if he could just push on through. We were pretty sure he was not supposed to be driving through there, and luckily the gentleman from tearoom–the one in the kilt–met us at the top of the hill and attempted to help the poor driver back up the steep path. We decided that we’d snap a few pictures and run to our car to get it out of the way when the truck cam barrelling back down the hill! 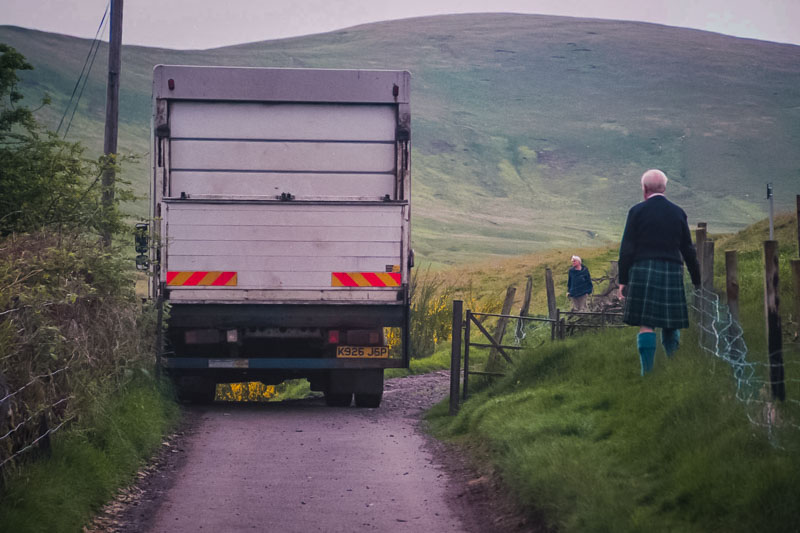 And finally, some of the gorgeous scenery as we walked around the grounds: