The site at Caerlaverock has been fortified for millennia. The romans had an outpost here, and the remains of one of their camps lies just to the west. The original castle site also stands a short walk through the swamp to the rear of the stone keep. Historic Scotland is in the process of organizing an archeological dig here, which is very interesting. The site they are excavating may have been the location of the original castle, or merely a temporary site that was occupied when Caerlaverock was being restored. The ground is marshy and wet, and is an unsuitable place for a stone castle.

Caerlaverock actually has two moats that surround the stone walls. It was windy when we visited and the water laps up against the stone foundations. The undulating ground would be a strong deterrend to an attack, but the long sloping plains were good siege-ground.

Considered one of the strongest castles in Scotland, Caerlaverock is built as a triangle with huge towers on each corner. It was probably built between 1280-1300 by the English during a struggle between Edward I and the Scots. It is the only triangular plan castle in the UK.

Besieged in 1300 by Edward I, Caerlaverock surrendered, after which the English held it for 12 years. Then, the master of the Castle changed sides and dismantled the castle in accordance with Robert Bruce’s policy of slighting castles to prevent them from being used by the enemy. It was dismantled by 1357, but may have been repaired by the 1370s, although there are no records of it being occupied until 1425, when Murdoch, Duke of Albany, was imprisoned in the tower that bears his name.

Caerlaverock was rebuilt once again in the 15th century, carefully following the original design to restore it. It was successfully defended against the king in 1640 by Covenanters.

James V visited the castle in 1542. It was surrendered to the English in 1545 as part of a settlement, but was promptly recaptured by the Scots, and then taken back again by the English in 1570.

The residence block was built in 1634 by the Earl of Nithsdale, and must have been quite luxurious and comfortable. The doorways and windows are topped by carved lintels in the classical Renaissance style. This range took over the function originally formed by the suite over the guardhouse. A new hall and other apartments were created on the south wall at the same time. The block is quite out of character with a rough-hewn Scots castle, and must have quite a sight when first built.

In 1640, the Earl and a garrison of 200 men surrendered the castle to a force of Covenanters let by Colonel John Hume, after a siege of ‘only’ 13 weeks. It was demolished by crumbling the south wall and tower, which remain destroyed to this day.

By the late 18th century, the castle was a popular visitor spot, and it was handed to the state in 1946. We missed the re-enactment of the assault by the English by a few weeks, and there were festivals and parties planned during the event.

The triangular curtain wall has towers on two corners, and a massive double gatehouse on the third that contain the well-protected gate. The two towers are 26′ in diameter. The entire castle was made concentric by surrounding it with an inner moat, ramparts of earth, another moat, and finally a higher ring of earthworks. Approaching the castle from the landward side would have been a dicey proposition, but it did provide a reliable location to lob missiles and cannon fire at the castle, which eventually led to its downfall on several occasions. Attackers had to cross two separate bridges before even reaching the gatehouse, but ballistas could demolish the walls from a distance without any resistance.

The walls are over 2m thick, and rise directly from the waters of the inner moat. The south side has a round tower of 6.5m at each end, and is roughly 42 m long. This is one of the earliest parts of the castle; only the lower part of the west wall and the towers at either end survive.

It’s easy to walk around the entire perimeter of the castle, and I must admit that Caerlaverock is my favorite caste. The strong front towers and moats make it a truly fantastic example of castles in Scotland. The earthwork between the two moats offers a good view at the crumbling side walls of the castle, demolished by cannon and ballista fire.

The rear wall is most damaged, with the two rear towers only foundations. When it was complete, the high curtain wall surrounded the entire caste. I never did find out how far down the stone walls went into the marshy inner moat. It could be only a few feet, it could be twenty before the stone rests on solid ground. I don’t know, but considering that the stone from the walls had to fall somewhere, and we didn’t see any in the water, I think it must be quite deep. 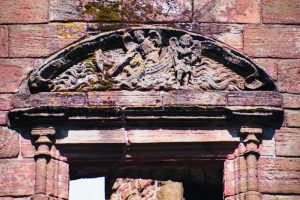 The Nithsdale apartments must have been quite a sight when they were first built. They are very ornate, and certainly not in keeping with the stark stone of the walls of Caerlaverock.

It is possible that they were plastered, or harled, to a smooth surface, with the stone decorations surmounting smooth, shiny walls. There is not much left inside to give any indication of the rooms, but the interior of the castle is not very large.

Historic Scotland is running an archeological dig to the rear of the castle, about a half mile away through the marshy forest. They’ve had to lay down planks to walk on most of the way for the visitors who want to see the original site of the castle. Actually, they’re not sure if this was the original site of Caerlaverock, or a temporary site, or another camp, or an even earlier fortification. So far, they have uncovered the foundations of walls, but no one was manning the site the day we visited, so I don’t know if they found anything else.

And some additional photos of my favorite castle: 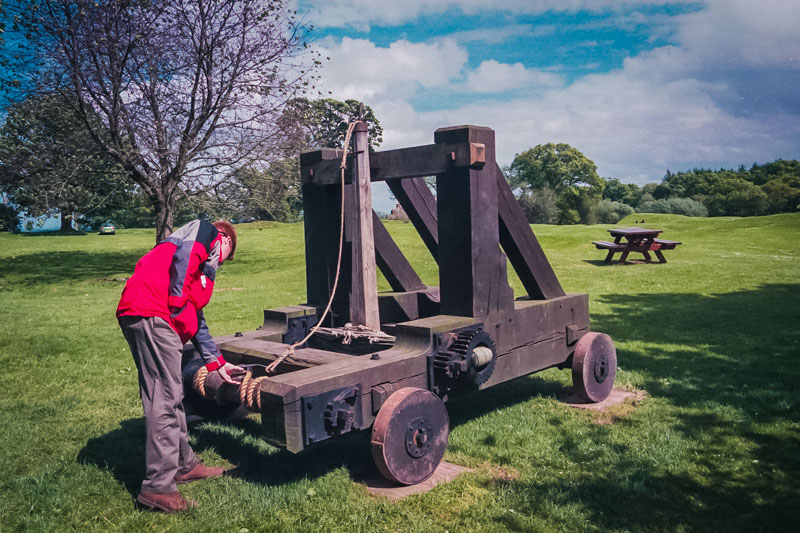 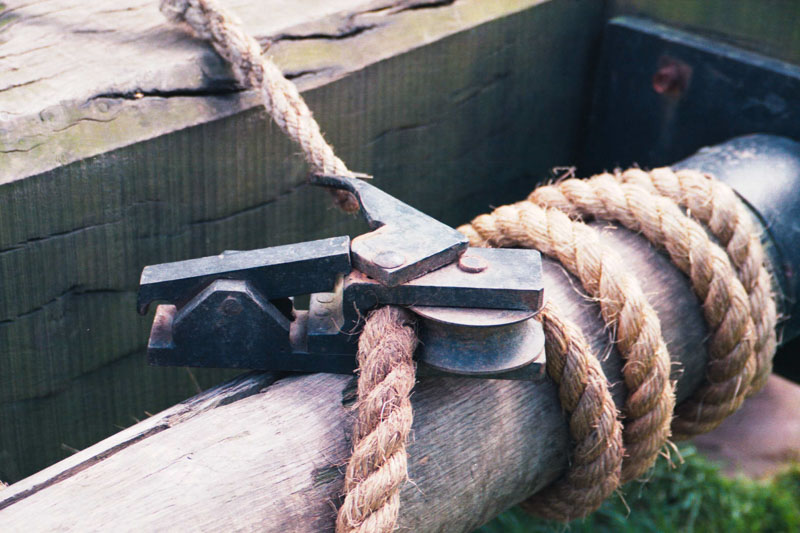 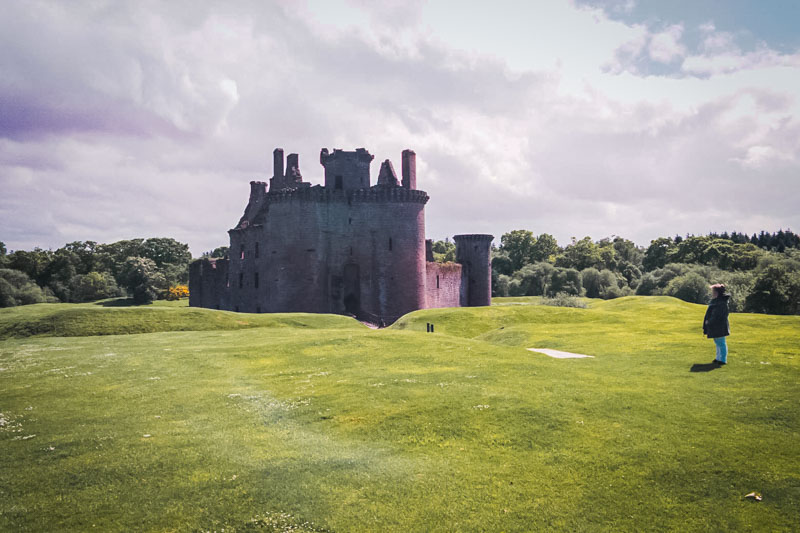 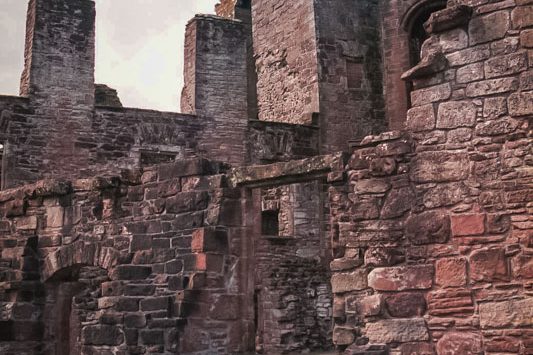 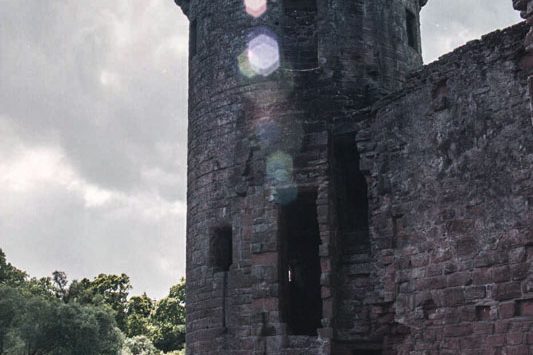 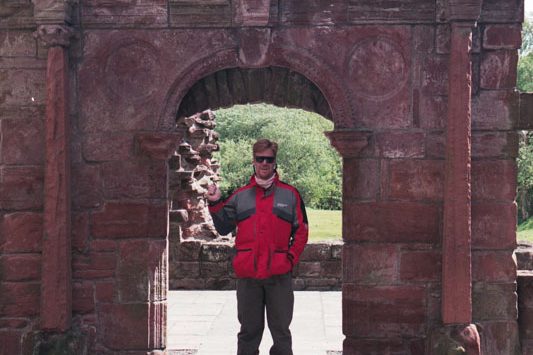 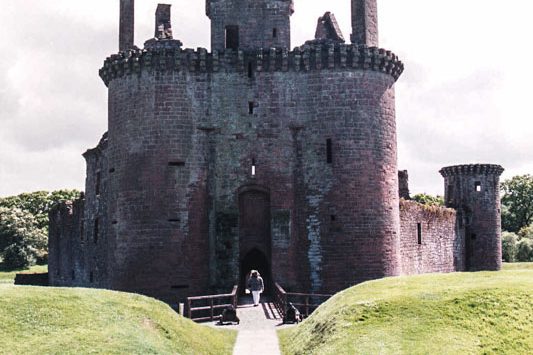 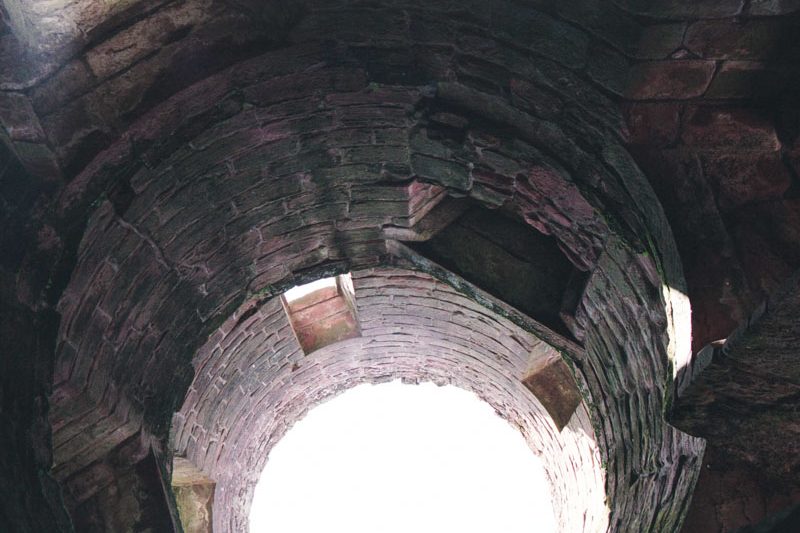 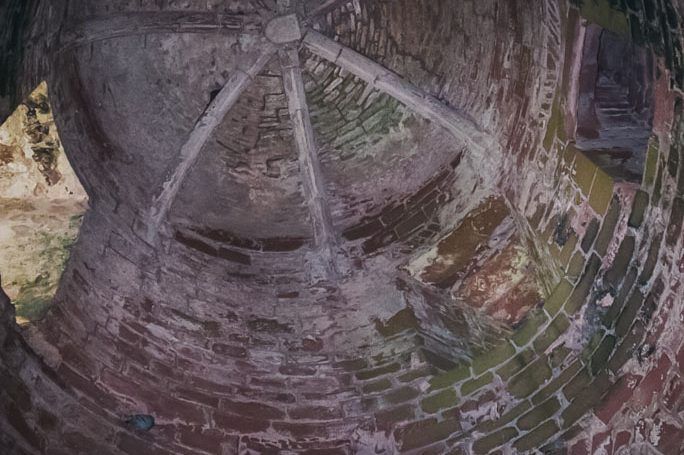