Stirling is considered one of the strongest and most impregnable castles in Scotland. It sits on a tall, rocky crag and is approached by a long, winding road (the Castle Wynd) through the old town.

Stirling, like most other large fortresses, began as a timbered and earthwork castle on this basalt outcrop. Alexander I (1107-24) built a chapel here. David I stayed at Stirling many times, and his grandson William the Lion died here in 1214. Nothing remains of these wooden buildings. The complex of stone structures is from the 15th century and later.

The earliest recorded casstle at Stirling was used by Malcolm Canmore in the 11th century. Stirling represented Scotland’s military resistance to the English in the Middle Ages. It was siezed by Edward in 1296, recovered by Wallace in 1297, and then lost again to English hands in 1298. The scots retook Stirling in 1299 and held it until 1304.

The great seige in 1304 saw the castle bombarded for four months by seige engines hurling lead balls (from nearby church roofs), greek fire, stone balls, and even some sort of gunpowder mixture. Under this attack, the garrison finally surrendered in July. The English held the castle until 1314, when it was yielded to the Scots after Bannockburn. Robert the Bruce had the castle slighted (dismantled), but it was rebuilt several times.

The castle served as a a permanent crown residence for the Stewarts. The oldest buildings are the gatehouse and two narrower entrances. The block is flanked by the Great Hall and also by substantial round towers, which would have had capped roofs when they were built, but were crenelated in the 18th century to conform with the idealized view of a castle.

James, infant son of Mary was baptised here in 1566, and then crowned there as James VI when he was 13 months old. Stirling’s last military use was an attack by Bonnie Prince Charlie in 1745. The army finally left in 1964 after using the castle as a barracks since the Jacobite rebellion in 1745.

The castle itself is entered by climbing the tail of the rocky crag, crossing the first gateway and ditch, then into the Inner Gateway. The 15th century entry and portcullis house, from the time of James IV, opens to the lower courtyard. On the left is the Queen Anne Garden, which was once a bowling green, and is now a well-tended formal garden. The King’s Knot, visible over the tall stone walls on the plain below, was once a huge formal garden. The outlines, laid out by William Watt in 1627, are all that remain of the grass covered hill.

The lower square of the castle is bounded on the left by the Palace, with the Great Hall straight ahead, and the Grand Battery which overlooks the town of Stirling and Stirling Bridge on the right. The Grand Battery is an impressive series of terraced casemenets that hold row upon row of cannons that cover all the approaches to the Castle.

The Palace was begun in 1495 by James IV, it was completed in 1540 by his son. It is a msterpiece of renaissance ornamentation, including statuary and other decorative coursework. Stirling Castle, Falkland Palace, and Linlithgow Palace remain the only examples of European Renaissance ideas, but they didn’t have much effect on Scottish architecture as a whole.

A ‘Pink Lady’ haunts the castle and is rumored to be Mary, queen of Scots, or possibly a woman searching for her husband. The ‘Green Lady’ is the harbinger of bad news, and is often associated with fire. She may have been one of the ladies of Mary, and has been seen recently. 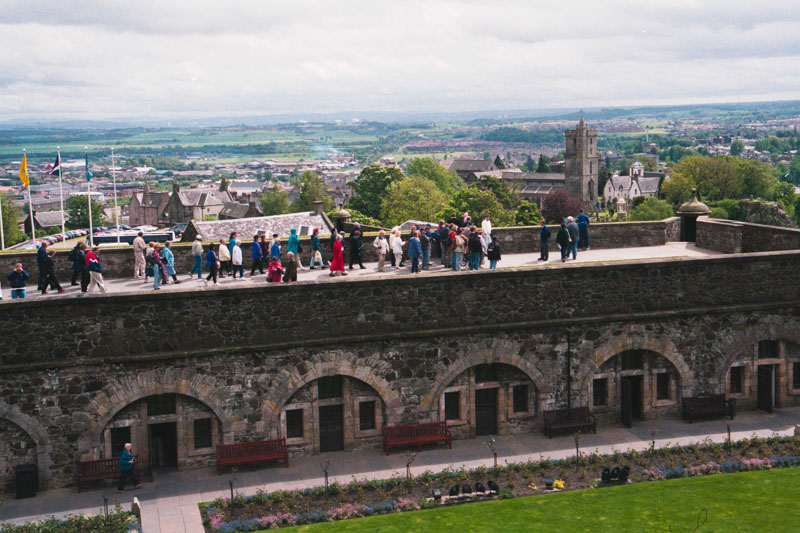