There are two general types of basaltic lava flows,  pāhoehoe and  ʻaʻā.  In Iceland, they are called helluhraun and apalhraun.

Pāhoehoe is smooth thick lava, that flows like molasses and cools in wavy arcs. When lava flows slowly, a crust can form on top that inhibits the lava from bursting through. It can form into huge flat expanses of rock, flowing over and around objects in its path. Often an expanse of ropey ridges forms when the lava encounters a barrier and sort of piles-up behind it. This is the most common type of lava in Hawaii, for example, flowing from shield volcanoes to form miles of new land

We saw examples of this near Hraunfossar.

A’a is a spiky, cinder-like lava surface that is broken and often loose (and hell on exposed toes in sandals!). It forms when lava flows rapidly and the cooling top layer is repeatedly torn and fractured by the free-flowing lava beneath. Cinders and rocks are caught up in the broken bits of the crust and form the characteristic rough and loose lava fields.  In the Galapagos, it felt like walking on chunks of pyrex glass — grating and squeaking underfoot. This seems to be the most common form on Iceland — huge, miles-long fields of jagged rocks and piles of cinders stretch out everywhere. It’s nearly impossible to hike on.

A third type of lava is pillow lava, which forms underwater and cools in billows as it flows.

One of the strangest sorts of rocks we saw in Iceland was columnar basalt — slow-cooling basalt that crystallized within a lava flow, beneath the surface formation of either Pāhoehoe or Aa. Since it cools slowly, it contracts evenly, and cracks into large blocks, forming regular geometrically shaped columns, often many meters tall. The columns are usually hexagonal, but often have more sides. 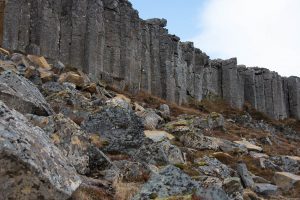 Gerðuberg is a mile-long escarpment of columnar basalt, Svartifoss falls from a curved arc of basaltic columns, the coast near Arnarstapi,  and dozens of smaller outcrops appear all over Iceland.  Elsewhere, the same sort of rock formations show up in the Giant’s Causeway in Ireland, Fingal’s Cave in Scotland (and many other sites)