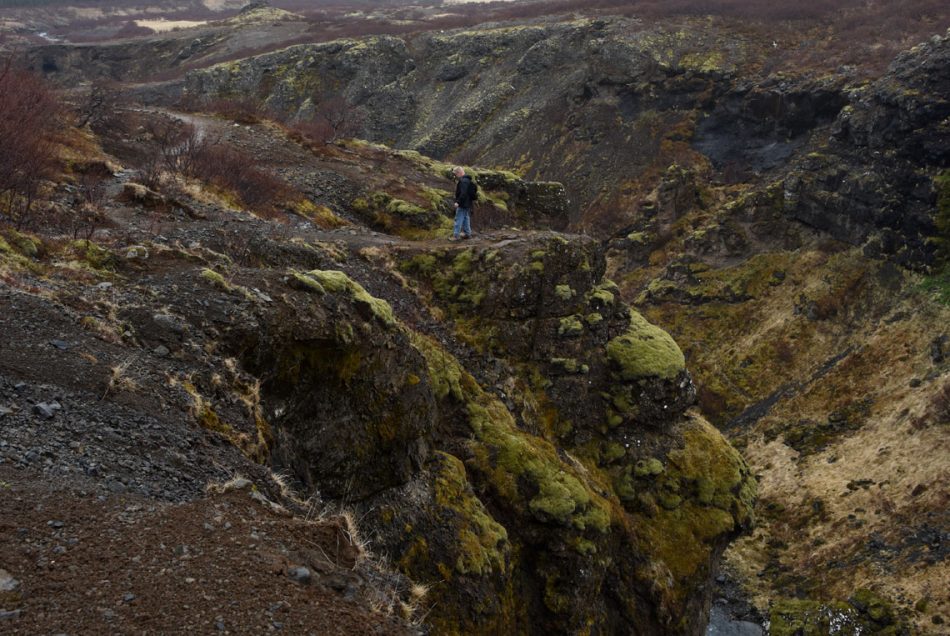 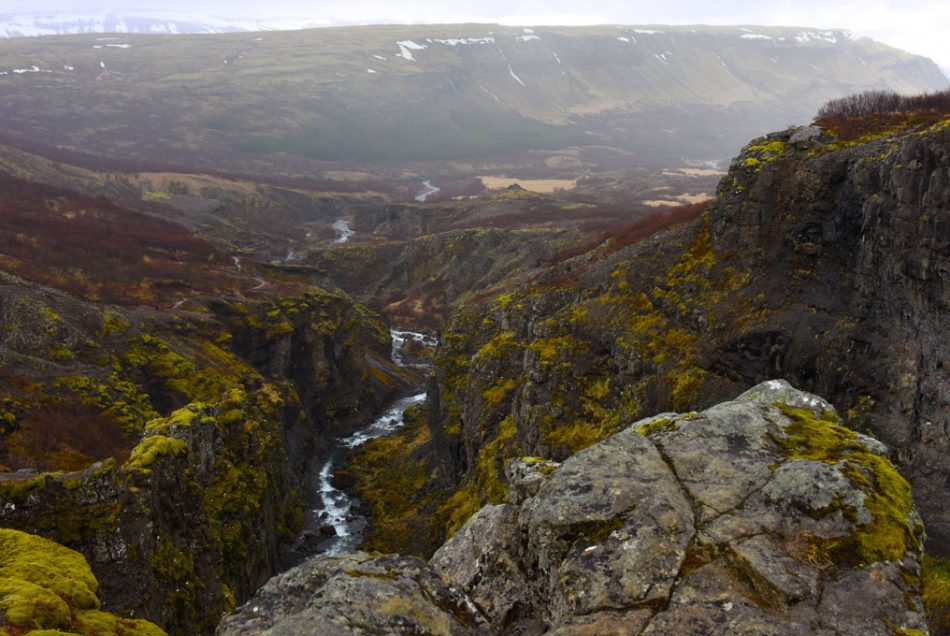 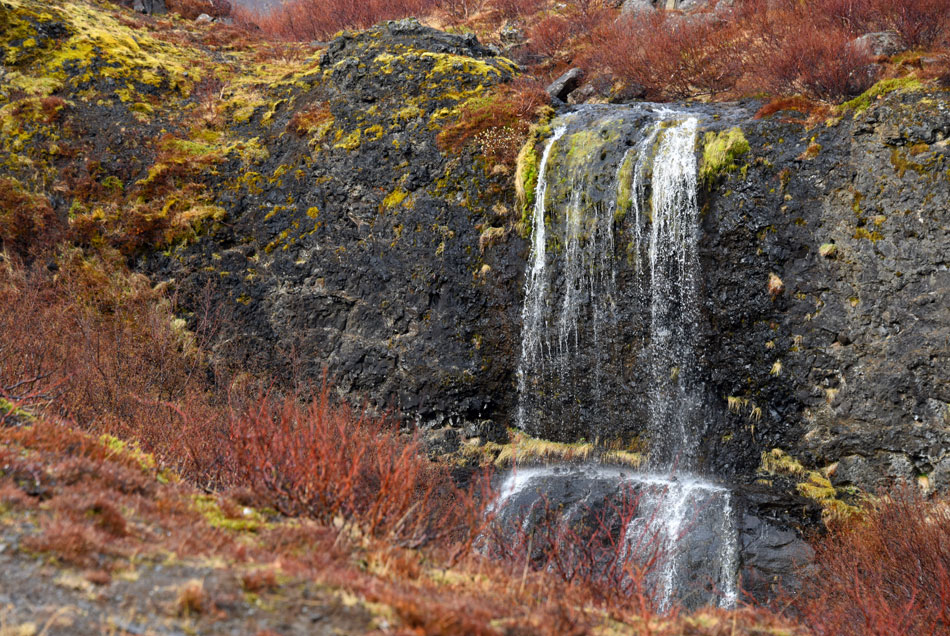 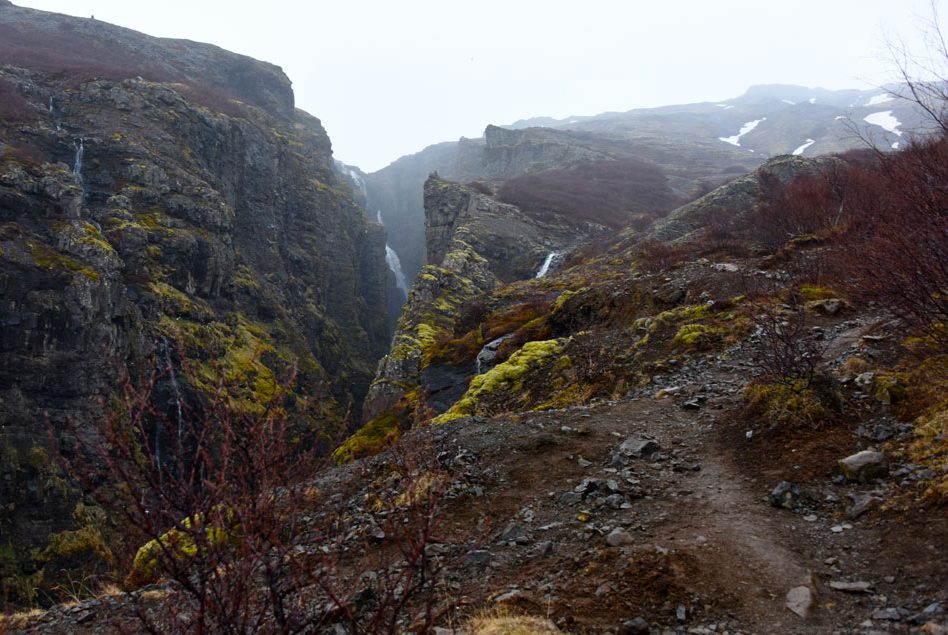 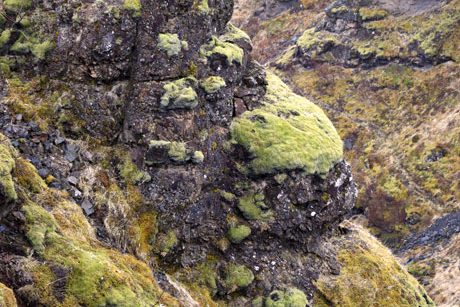 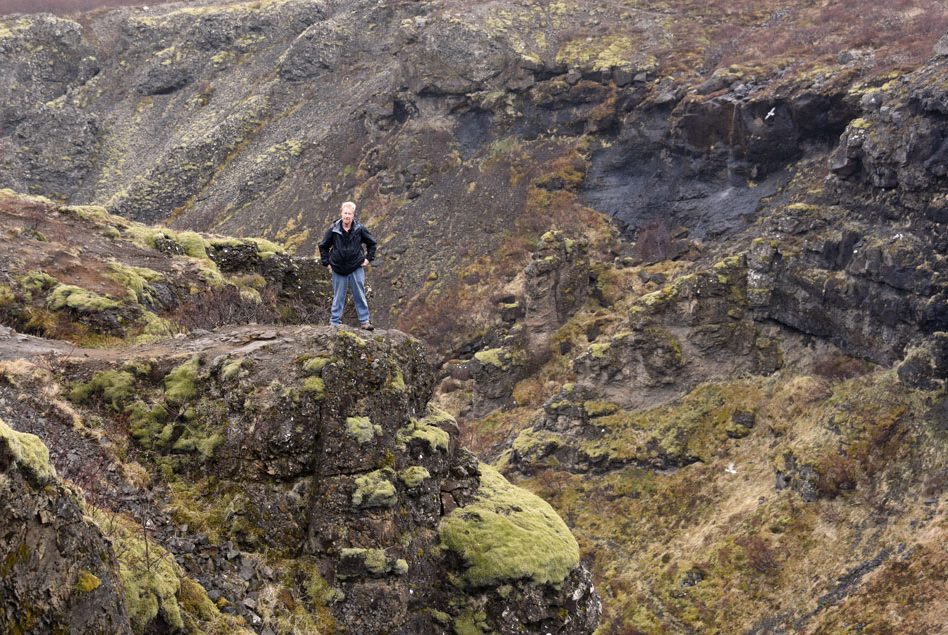 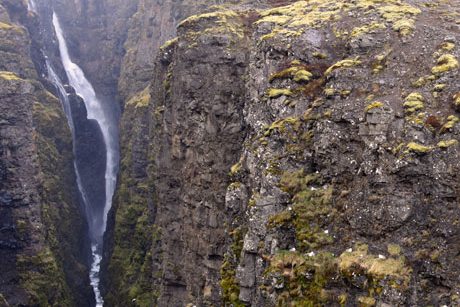 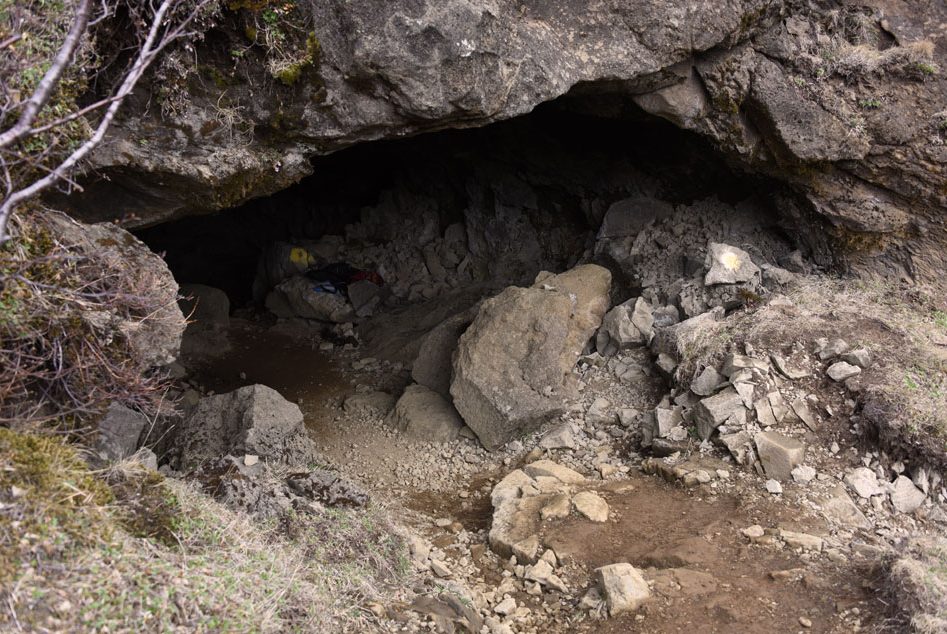 It’s never a bad idea to pick one of the ‘-ests’ for your first visit in Iceland. Biggest, longest, tallest: pick one, you’ll never go wrong. Glymur –the tallest waterfall in Iceland — won’t disappoint.

At 198 meters (650 ft), the narrow cascade of water at Glymur is the tallest waterfall in Iceland.  The river Botsná falls down a narrow canyon at the end of the Hvalfjörður,  a 5km hike from a small parking area off Rt 47. The fjord is about an hour drive north of Reykjavik, off Rt 1 (Ring Road). Glymur is a spectacular waterfall, not only for the height but for the noise of the falls — Glymur (pronounced roughtly glimmer) means ‘clashing/ringing’ in Icelandic.

Descriptions of the hiking trail to see the waterfall usually mention “crossing a river on a log”. Don’t be fooled – that is not the hard part!  The trail winds through a small cave, wet and muddy paths along the river, and some very steep climbs (assisted by ropes lining the trail). It’s not a technical climb, you don’t need to be a mountaineer, but it was steeper than I expected and I found myself pulling hand-over-hand on the ropes in some places. I assume someone in better shape could hike this 2-3 hours, but it took us a bit longer. And, if you are afraid of heights, or not very stable on your feet, you might want to pass on this one as it gets very steep and narrow with some impressive drop-offs. Best-Hiking has an extremely detailed review of the hike.  There are two paths — the northern and southern.  You can hike to the top of the falls themselves on the north, but the marked trail (yellow-painted rocks) we followed went to the viewpoint across the canyon. The southern trail is harder, but worth the better views.

Note that there have been accidents on the trail to Glymur — the paths are narrow and the canyon is steep. People have fallen into the river, requiring rescue, and the trail can be muddy and slippery. A fall could be very dangerous. There is limited signage and safety measures on the trail.

Extreme Iceland offers tours to hike to the waterfall here. Trek Iceland has day tours here.  A tour is not necessary, of course, but the trek to the waterfall does require your own transport, otherwise. There is no bus service to the starting site.

Ah! When I was looking for details about Glymur, I ran across a note that in 2011, park rangers discovered and measured a taller waterfall –a new waterfall near Morsárjökull is higher, at 228 meters (748 ft).  They are waiting on the ‘official’ measurement, it seems. Almost all guidebooks and sites still note Glymur as ‘tallest”, but that will likely change!