Up late, as expected, with only six hours of sleep and too much Scotch, but ready to go. Once again, it’s raining really well. We backtracked a bit to find Findlater Castle, a small ruined fortress out on the seacoast. We followed the teeny little signs and then hiked about a mile in the wind-blasted rain to the shore. We made it to the crag overlooking the little castle, and huddled down in the stone observatory to get out of the howling wind. Once again, the wind here is AMAZING.

Findlater is a tiny castle, seemingly built directly into the bedrock of this tiny island. Only a little spit of land (which used to be covered by a bridge) connects it to the shore. It is far too windy to go across the spine of the bridge to see the ruins, so we tried to take a picture or two from the observation point. I don’t know if they’ll come out — I was crouched down under Mark’s arm trying to keep the camera steady. The rain lets up when we trudge back to the car. The backs of my knees are wet.

Our next stop is the Bishop’s residence of Spynie Palace. It’s an awfully nice house for a Bishop. Inside, a lot of the original plasterwork is preserved and they’ve put a clear Plexiglass roof over the top of the tower. It still leaks a bit, but does preserve the walls and arches inside. Mark didn’t like it — he feels they should have done something a bit more elegant than laying clear porch-roof panels over the top. There is also a new buttress against the main wall, since the tower is apparently leaning a bit. A very tasteful plaque notes that this is a later addition.

Before shooting of to Inverness, we stopped at Duffus Castle. Another engineering marvel — the stone castle built on the man-made motte sank. It looks like it’s still coming down, really, although they are doing work to stabilize the remains. The castle sits on a huge hill that was completely man made. The wooden fort that stood here was ringed by a huge flat bailey and moat. The stone castle sits in the same location, but the foundation wasn’t meant to hold the weight. Amazingly, the corner of the tower that has fallen remains intact, although it appears to be sliding down the hillside. It’s a really strange visual effect.

Driving out to the castle, we stopped to take another road sign picture, this time of an airplane (which means what? Airplane crossing?) and found ourselves followed by a military security car for about a mile. We didn’t realize that we were driving through an air force base (or at least near one). They must have wondered what on earth we were doing! 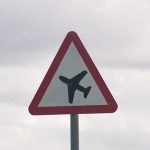 We finally crapped out entirely and headed in to Moyness House in Inverness, had McDonalds for dinner (the fries have less salt, which is odd, since everything else is highly salted, and they have lamb on the menu!) and I twisted my ankle on the way back.

Inverness was hosting the Highland Food Festival, although it had ended by the time we arrived. We were asleep by 8:30. In twin beds. We were both so totally exhausted. I don’t remember a thing after we turned out the lights.