We wanted to stay another night at Carriden House, but she was fully booked.

Tuesday? Monday? Ok, I’ve forgotten what day it is. Is that relaxed enough? I haven’t thought about work the entire time we’ve been gone. Nothing. Wahoo!

It poured rain in spurts all morning, punctuated by glorious sunshine. Once the first drops hit, it rained for maybe ten minutes, then the sun rose again. A bit muggy. We spent quite a bit of the morning in the car.

Everyone drives really small cars here, a defense mechanism against narrow roads and small parking spaces. They have all sorts of models that we don’t have in the states “Proton”, “Polo”, lots of p-names. They also have a “Ka” from Ford that is so small that the back wheels seem to be an afterthought. Every once in awhile you’ll see a large Mercedes or Volvo–an “estate car”, but they are rare enough to be odd. Considering some of the places we’ve been, I’m glad we’re in a tiny car! 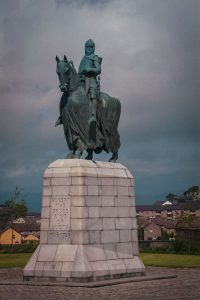 We started off at the Bannockburn Heritage center this morning, to see the site of the battle in 1346 (Stirling Bridge, fought in 1297, is also nearby). We followed a group of school kids in and got invited to their presentation — an actor came in and did an amazing presentation on weapons, history, and of Bannockburn itself. It was a hoot! He did all the voices, and really got the kids involved. “I don’t care about spears! Win now!” voiced from behind a scowling 10 year old kid, as the actor waved his arms around wildly like a puppet.

There really isn’t much to see at Bannockburn itself. It’s just a field. It’s easy to imagine mounted English knights, crossbowmen, and foot soldiers against the wildly outnumbered lowland and highland armies. You start to imagine scenes from Braveheart and hear the bagpipes. Obviously, the Heritage center did a good job of giving us an idea of what happened here.

We tried to find Alloa Tower, missed an exit and just kept on to Aberdour Castle. This is an interesting ruin, and you can see the many phases of building, some in ruins, as they built on to existing tower. The oldest part of the house, the corner of a tower, came crashing down and now sits at an angle in the courtyard — in one piece.

The Historic Scotland guys are repointing, and I spent some time talking to an older gentleman who was carefully brushing away loose mortar from the huge wall with a 1″ paintbrush, looking for damaged areas. They do it in circles every year to maintain these old piles. I think that their main task here is to stabilize a leaning and bowing garden wall that was beginning to collapse. They had the terraced gardens walled off as a result.

They were planning for a wedding, too. No matter where we went, someone was setting up for a wedding. Wouldn’t that be cool? With the velvety green grass and old stone outside, and these great halls inside — it would be a memorable wedding.

We barely get up the road (towns on the coast are often less than 1/4 mile apart, if that!). How can you consider it two separate towns if they both have, at most, seven houses and are 200 yards apart? Anyway, we tracked down Ravenscraig Castle and Park and wandered off down yet another unmarked path to find the ruin. A half-dozen kids, maybe 10 years old, were clambering all over it like monkeys. When we finally found the entrance, they were all slipping in and out of the iron gates barring the doors. I got a good picture of one of the boys behind the dungeon yett. They told us that they liked the way we talked, and wanted to know if we had met Clint Eastwood. When we started wandering around, they followed us, trying out their “American accents” on us — notably Forrest Gump — and doing their best imitation of Mel Gibson as Braveheart — their “Scottish Accent”!

We had to climb over a few railing to get a good look at the castle, but nothing that looked too dangerous. Ravenscraig is very large, but we couldn’t see enough to see how it was laid out.

But, down on the beach a bit was the very large dovecote, and even farther on, more walls. We followed the coast trail awhile and finally decided that the wall had to be modern, otherwise Ravenscraig encompassed hundreds and hundreds of acres within the castle walls.

We probably walked for an hour or so around the park — I finally got a picture of the little dog poo baskets, here in Fife it’s a £500 offense to let your dog “foul a walkway”. Must have been a serious problem to warrant that kind of punishment!

MacDuff’s Tower was right up the road (is everything right up the road?) but we had to do one of those squealing turns once I saw it. We packed up and walked through the field to get a closer look. It’s very ruined — it appears to have been maintained at one point in the past, but no more. The arches are collapsing, and there’s a huge crack in the main tower. You can see the staircase rising up through the ruined towerhouse, but it was too dangerous to climb. It’s spooky. The book says it’s haunted, too. I’m glad we stopped. This was another ‘paranoid farmer’s house’, but he built an interesting tower.

We saw a few other likely ‘piles of rock’, but we were late to the B&B, Beaumont Lodge, and we didn’t stop tonight. We got the 4-poster room, which is large and bright. The proprietor — Mrs. Anderson — is very talkative and charming. She had tons to say about local things to see and where to go.

Dinner was stupendous — probably the best I’ve had so far in Scotland. Ms. Anderson obviously loves to cook. I had salmon, Mark had lamb. I was trying to figure out how to lick the dessert plate to get the last of the home-made butterscotch sauce off without getting caught! Two seconds after I told Mark, Tom Anderson walked in. Talk about timing.

For a tiny, almost commonplace Bed and Breakfast, we were incredibly impressed. We decided to stay another night — mostly the food, I think. The bed was comfy, the room very comfortable, the shower hot.

I don’t think that most places here have central hot water. Most seem to have electric local heaters, usually MIRAs.It means unlimited hot water but very touchy temperature control. Pressure is iffy, too. It’s nice to have an “American Style” shower.