After a nice breakfast — I forgot again to order my egg scrambled, though. If you order the well-publicized ‘Scottish Breakfast’ you get served bacon, sausage, eggs, toast, oatcakes, and fried tomato. Fried tomato? Who thought this was a good idea? Ugh. We did decide during breakfast that toast in Scotland is meant to be burnt and cold. It’s even served in a handy little toast cooler. And it’s either white or brown toast — we got the strangest looks asking for wheat toast. Then again, I should have saved the label from the ‘whole wheat multigrain white rolls’.

We were packed up and ready to go early today, since we have a full day planned . It’s another unseasonably wonderful day. It’s sunny and gorgeous…I think I’m actually getting sunburned!

Off to Melrose Abbey. We really want to see all the Border abbeys today, but we’ll see how far along we get. I’m not sure we’ll manage it, but it seemed doable at the time.

These are the ‘Border Abbeys’, originally built (or commissioned) by David II. This guy was definitely not a conformist. Anyway, they were originally built to (possibly) appeal to the English and make the Scots churches (and the godliness of the Scots) more obvious to everyone. Didn’t work, of course. The Abbeys were systematically sacked and burned — several times — and eventually abandoned.

Melrose Abbey is pretty awe-inspiring. I was amazed at the scale and grandeur of the place. Huge, huge stained glass windows, enormous stone vaults. It’s incredible. Most of the ‘outbuildings’, the cloister buildings including the priest and lay quarters, the chapterhouse, kitchen, are just faint outlines in the grass of the stone foundations. Some few are stone rubble walls, occasionally a window or two. The south char wall is there — rows of gothic arches and windows.

Inside, it’s mostly empty — the main aisle is pretty ragged, but you can see the bases of the huge pillars, all still decorated, that supported the roof. The side aisles are in place, and you can see where the rebuilt walls lie right over the initial walls. It looks like the original church was very simple, and they added all the frou-frou. The apparently didn’t finish. Still, it’s an impressive attempt.

All this red sandstone and intricate carving. It seems like a huge effort for a church. But I don’t think that we understand the importance, or the status, of the church in medieval life. The abbey had to be big and ostentatious. Also, people who did not want to do their own praying basically gave money, or land, or properties to the abbey so that the monks there could do it for them. They bought salvation, and the monument we wandered through was the result.

Melrose , like all the other abbeys, has no fireplaces save one on the “warming” room, the central parlor where the monks would gather (briefly!) to talk. The rules forbid any luxury, which heating was considered one, but I don’t think that Rome understood the rigors of an unheated Scottish winter. Still, it must have been bone-chillingly cold in some of the rooms.

Mark wasn’t quite as agog as I was. It bothered me for a while until he mentioned that he has seen the grand cathedrals in France, Notre Dame, Chartres. These seem pretty puny in comparison. He assured me that they were still very cool, especially since they were ruined, but I can’t imagine a church four times as large as this. 250′ tall is just a bit too much to imagine. Of course, they cover city blocks, but geez! This one made me feel small and pretty darned insignificant. Which is, I imagine, exactly what it’s creators intended.

The prefectors house has some displays about the Abbey, and some stuff they’ve found inside during the excavations, including the workings from the tower clock. In the ground runs possibly the oldest existing medieval sewer.

Historic Scotland does a good job.

Mark went off in search of Kleenex and I went into the NTS store. We ended up almost by accident in Priorwood Gardens, which is a lovely garden and orchard by the Abbey. Someone has put a lot of effort into it. Myself, I loved the springy bushes, and Mark has a few pictures to prove it. Boing!!

On the way to Dryburgh we zinged off the road to see the Wallace Monument and Scott’s View. It’s a long walk though a forest of elm trees to the Wallace Monument, a huge 32′ stone statue of the ‘ill-fated chieftain’. “Doesn’t look much like Mel Gibson”, a gentleman sitting under the statue said wryly. No, in fact, he looks like a Roman warrior, which I supposed is much closer to the truth, Braveheart notwithstanding. He faces south, “watching for the English”.

Scott’s View is just a little car park on the aide of the road, with a couple of plaques and a stupendous view. You can see why it was so well loved by one of Scotland’s favorite sons. The view of the three hills (the location of the Roman Trimontium) and the River Tweed are beautiful. It looked almost exactly like the engraving on the plaque, even down to the plowed field and trees. One of the plaques noted that the funeral procession for Sir Walter Scott stopped here. The horses were so in the habit of pausing on the crest of this hill, that they did so unbidden.

Oh, I forgot — there is a new marble marker in the courtyard of Melrose Abbey that marks the burial place of Robert the Bruce’s heart. It was buried in a new lead casket in the Spring of 1999. It had been missing for awhile, I guess. Looking at the worn and weathered gravestones surrounding it, I wonder how long a simple marble stone will last?

There are a couple of men eating lunch overlooking Scott’s View . What a wonderful place to have lunch. As we were ready to go, a vanload of day laborers showed up to eat, too. Across the way, a couple and their two dogs were picnicking. The dogs had a great time chasing after the local bunnies. Ghlaive and puppyzilla would have had a great time! 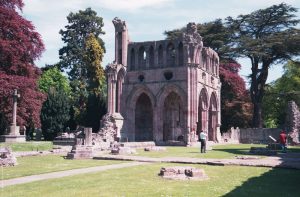 Dryburgh Abbey (no getting lost on the way, either) is very restful. Compared to the large, overdone…gothic-ness of Melrose, Dryburgh is very serene. A much stockier abbey, it nonetheless was still pretty impressive. It sits in a huge parkland, and the layout is very similar to Melrose — church and cloister buildings. It’s much more secluded, though, and I can imagine monks getting up at 3 a.m. to start chanting the hours until midnight and walking in quiet contemplation around the covered cloister walk.

More commercial than the others, Jedburgh Abbey has an interpretive center with video and dioramas. But the abbey is beautifully intact and very different from the design of the others. It’s quite austere, and looks vaguely Roman. Most of the upper range is gone, but you can sidle up to look down from the gallery along the impressive length of the nave. Here again, the size is mind boggling.

Most of the spiral staircases we’ve encountered in the ruins and abbeys has a sort of handrail in place — a robe is tightly wound around the central pillar of the stairs and anchored at each end. It’s quite effective, and I wonder if it was a modern addition, or if it is historically accurate?

Jedburgh is a quaint town, but we didn’t stay too long. I am now definitely sunburned. No one is going to believe that I was in Scotland — I’ll get a tan. Spain! I tell them I was in Spain. Someplace sunny! Eep!

Expecting a manned site, like the other Abbeys, we were surprised to find Kelso Abbey open and empty. There is less left of this church than of the others, but we spent quite some time trying to figure out how tall the main arch was. This was a double-cruciform church, and probably the largest of the Border Abbeys. Now, it’s a small corner-block with a pile of crumbling walls.

Some of the walls are bulging seriously, and it’s quite disturbing to wander under the arches. This abbey was dismantled systematically by an Earl who supremely disliked the church, and it shows. I wouldn’t be surprised if it came down on it’s own eventually. I think this one was worse hit in the raids, being the largest and most southerly.

We couldn’t have missed Hume Castle if we wanted to! It looks like a huge castle was buried in a mound of earth, with only the top of one of the towers showing. Actually, it’s just a folly, built on the site of an older castle, but it’s rather odd looking, nonetheless. Not much remains of the castle at all.

We also saw Smailholm Tower today, a wonderfully restored 4-storey tower house on the middle of the Borders. It was a farmhouse, apparently the owner felt quite justifiably paranoid, and the tower sits starkly on a hilltop. It’s quite comfortable, though, and the views out over the fields is quite amazing.

On the way back to the hotel, we just prepared to crash. Dinner was quite good again, although we passed on dessert — Scotland just swims in ‘sweeties’, and every dinner finished with a few scrumptious offerings. We were pretty much unconscious immediately. My nose is beginning to peel.