For anyone who dives, the Silfra rift is one of the top destinations in Iceland (some might argue anywhere). The water is utterly clear, cold, and you can dive between two tectonic plates with one hand on North America and the other on Eurasia. (Although this is not quite true — there is a sliver between the two that you are actually touching. I read what it’s called, I really did…and of course can’t find the reference now.)

I don’t dive, but Mark does. It’s been a while since he’s done it, but we both agreed he can’t possibly miss out on diving in the rift if he has the chance. We have a local dive shop where he did a refresher course, and he went through the drysuit course to be familiar with the equipment.  He was a bit nervous about it, I think. Add in the fact that he was snuffling and coughing as much as I was when we arrived, we thought it was going to have to wait until next time.

But he felt better, and I bullied him a bit.  The only glitch in setting it up was that the initial charge from Dive.is had an extra zero in it. Four hundred for diving is fine, four thousand would be a bit pricey! But they caught it immediately, and straightened everything out. We didn’t catch it in the email request; prices in Icelanic kronur are all x10, so we got used to thousands of kronur and didn’t quite see the bigger amount.

There are several companies that run dives at Silfra, we went with Dive.is, who run both scuba dives and snorkeling in the rift. They stage everything in a small parking lot across from the dive site, and I got a ton of pictures of Mark getting ready. There were three divers, Mark, a young woman from Indonesia, and a man from Germany who was in Iceland solely to dive the various sites around the island. Unfortunately, he couldn’t get his ears to equalize after the first dive, and didn’t go on the second one.

I spent a while talking to his wife as they were getting ready — I have a little bit of German, she had a little bit of English, and we managed to agree that we didn’t want to dive in freezing water. They were supposed to be diving last year, but a couldn’t quite swing the trip. It was getting cold and blustery and she retired to her car and I holed up int he camper downloading pictures while Mark was in the water. There wasn’t much for me to look at –although I did get one of my favorite pictures walking back to the car:

The clouds were still heavy, and I really wanted to get some pictures of the larger main rift in the sunshine, so I decided to wait out the clouds. The sun tried to peek out…but nada. So I sat in the warm car, looked at photos and updated my notes and ate gorp until Mark came back.

He was absolutely exhilarated. It had been AMAZING. The water was freezing, he’d had a blast, used his air faster than anyone else, and gotten the chance to hang out between the underwater cliffs. Absolutely worth it. He said the water was so clear it was almost disorienting, like floating in thin air — you can see for hundreds of feet in the ‘cathedral’. 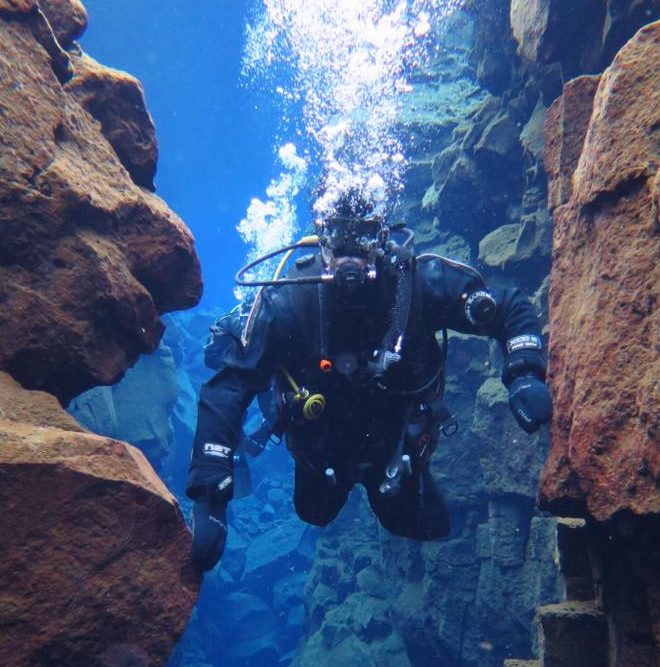 He was pretty cold by the time he got back to the car, so he didn’t want to hike out anywhere and we decided to head to Selfoss for the night and crash early. I was going to protest, but it started to rain and I missed my chance at perfect pictures anyway.